This guide provides links to selected writings by conference speakers at the 2014 Race and Pedagogy Conference held on the campus of the University of Puget Sound. 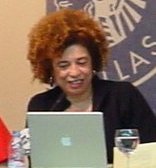 This page was developed by Lori Ricigliano, Associate Director for Information & Access Services.