The Coalition Against Injustice and Racism formed under the leadership of alumni Nicky Wright in response to many instances of racial injustice on campus. Most prevalent, was a Thug Life theme party in 2007-2008 where students dressed in black face and asked black students to borrow their gangster clothing. We currently do not have any official records of the party (due to lack of institutional transparency), but here is a clip about the party from the Trail. 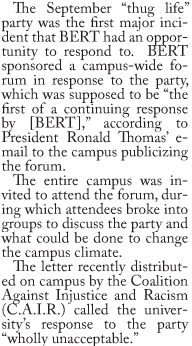 On Thursday February 28, 2008 a forum was held to discuss the Black Experience at Puget Sound. That night, BSU leaders and allies formed C.A.I.R. as they drafted a list of demands to deliver to President Thomas the following day.

Yusuf Word was BSU president at the time, and recently won the election to become the first African American ASUPS President. However, Nicky Wright was leading the creation of the demands.

On Sunday March 2,, 2008, C.A.I.R. met in the SUB to discuss their arguments for President Thomas.

On Monday March 3, 2008 they met with the President Thomas to discuss the demands.

From there, working groups were established to further work on the demands. 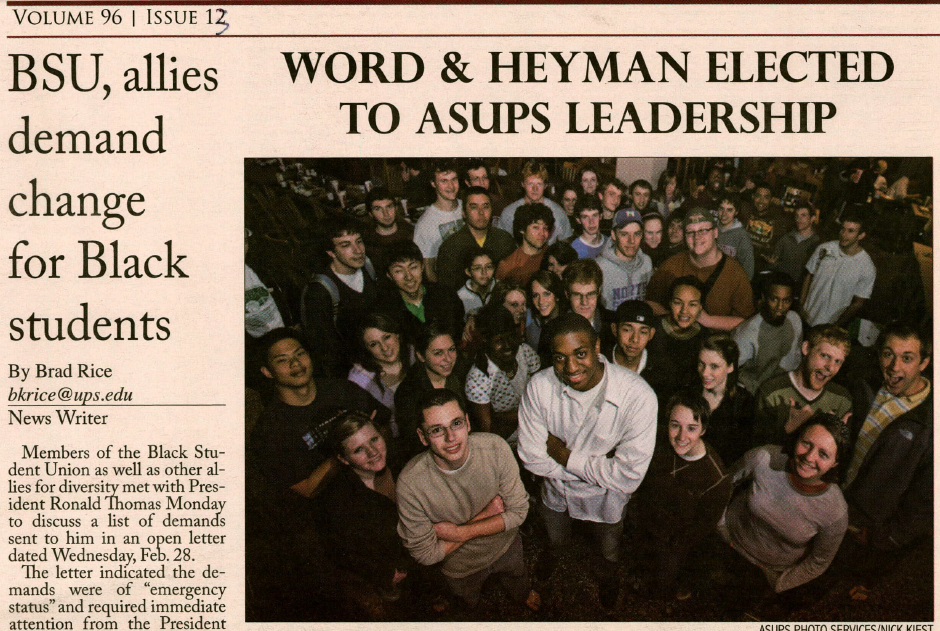 The March 14, 2008 edition of The Trail did not have a continued story; however, the March 28, 2008 edition followed with more details. 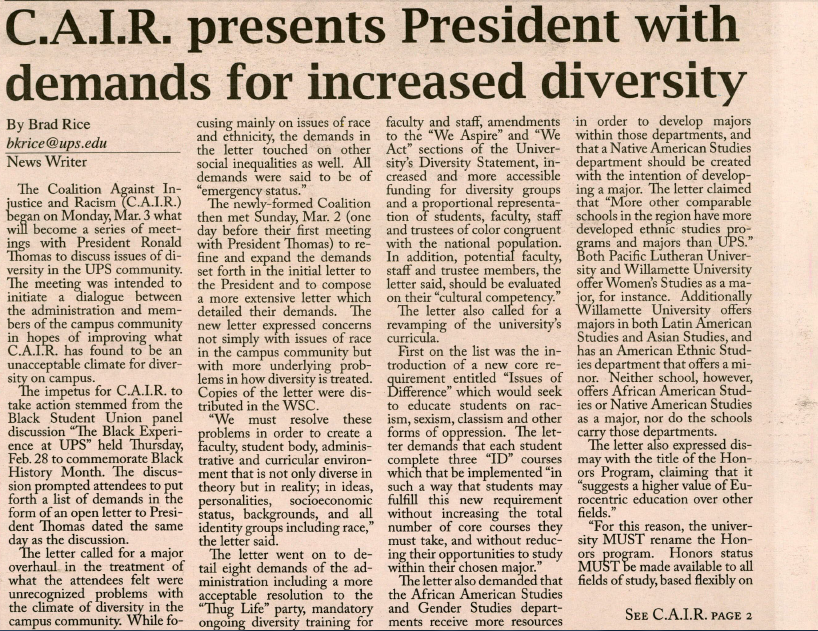 Tonight the BSU (Black Student Union) hosted a discussion forum entitled “The Black Experience at UPS”. This event, as most others, was under-attended. We feel that this under-representation of UPS community is fostered and perpetuated by a negative and adverse environment towards diversity and racial inclusion. We discussed some remedies that this university can, and is obligated to, approach and immediately put into action. These are essential in order to create a faculty, student body, administrative and curricular environment that is not only diverse in theory but in reality; in ideas, personalities, socioeconomic status, backgrounds, and all identity groups including and not excluding race.

This issue is of emergency status. We are aware that this type of action has been taken before by past Black Student Unions. We have spoken to several alumni and learned that the same issues and questions that plagued their UPS experiences - as far back as 40 years ago - still remain today. We are allied with members of the UPS faculty, Tacoma community, and members of the Race and Pedagogy Initiative.

This is a list of our demands thus far:

Again, this issue is of emergency status. We will not be pushed aside any longer. In our numbers we will not be able to fin in your office. We will be at your house at 8am Monday March 3rd to discuss these issues. We planned to speak with you tonight because we are extremely passionate about this subject. We have decided, out of respect, to set this meeting with you.

We look forward to seeing you,

Unfortunately we do not currently have access to the updated list of demands on March 2, 2008 that are referred to in the March 28, 2008 trail article. 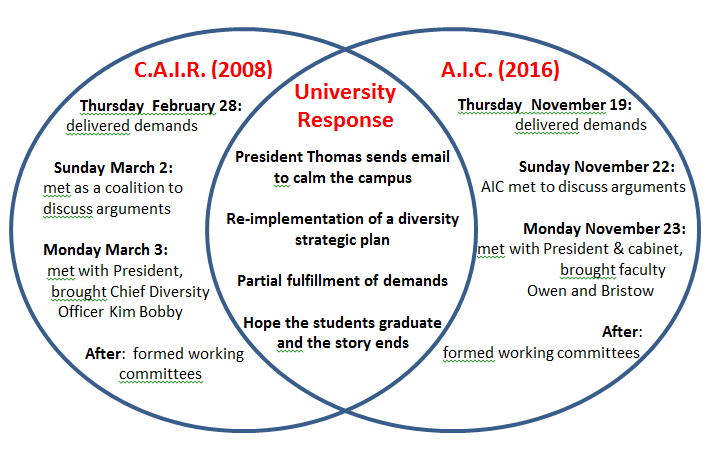 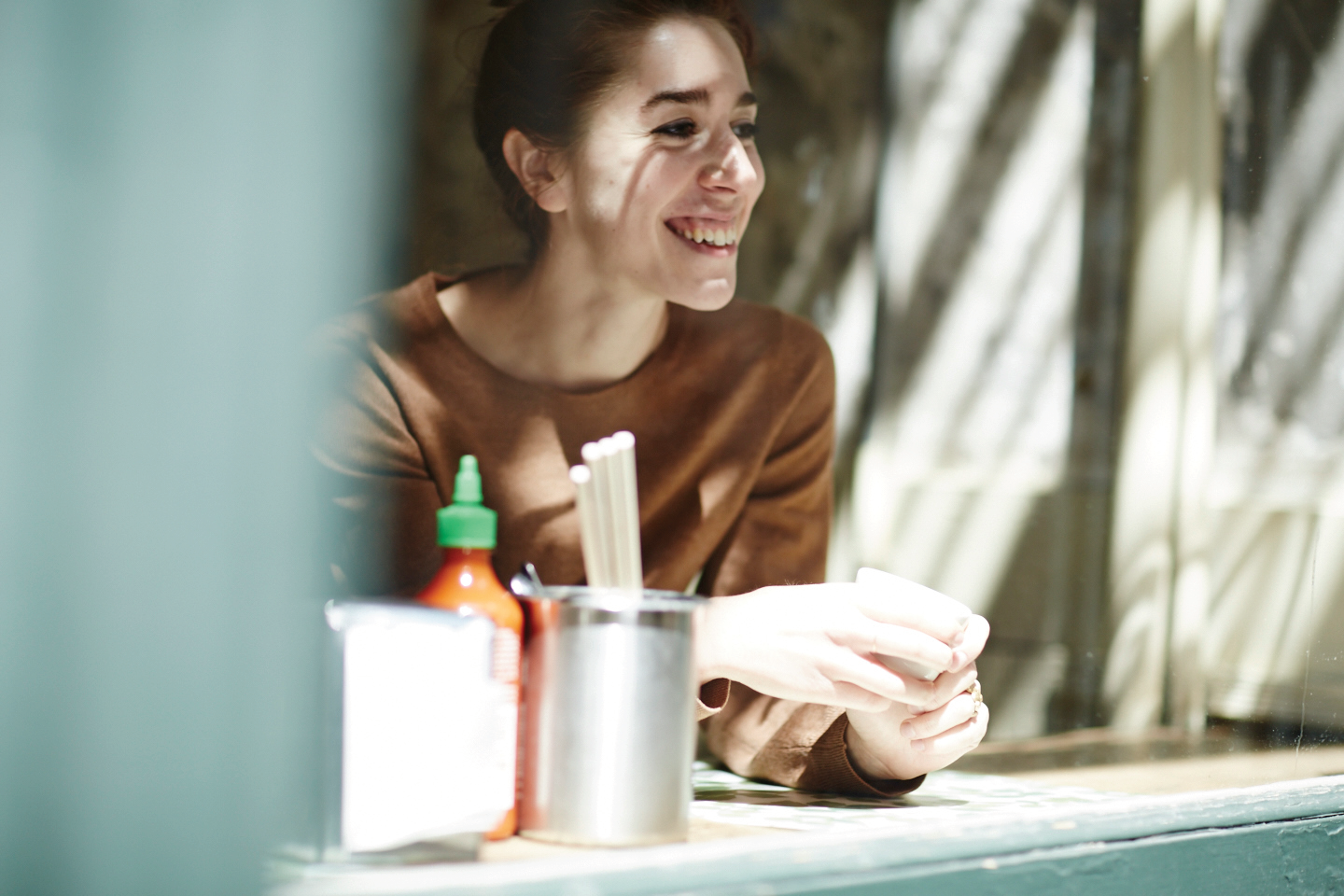 1). Is there someone significant to you that inspired you to become involved in social justice? (Can be anyone: family, professor, friends etc.)

What is your experience at the University of Puget Sound that drew you to become involved in social justice?

My freshman seminar course in 2006 was Imaging Blackness, taught by Professor Dexter Gordon. I learned to critically examine movies and TV, and, specifically, the ways pop culture has constructed identities and reinforced hierarchies in our society. That Fall was also the first year of the Race and Pedagogy Conference, which Dexter spearheaded. Not only was I grappling with issues of racial inequity in my coursework, Dexter also required his students to attend several of the events during Race and Pedagogy. So my first experiences at Puget Sound were focused around understanding my white privilege and issues of inequity. Grace Livingston was also a major influence in identifying, criticizing, and challenging institutionalized racism.

I met a student named Peter Ryan during the Race and Pedagogy conference, and soon became involved in organizing a group he founded called Race Readers. Our belief/approach was that to dismantle institutional racism, we first had to understand and dismantle the racist conditioning we'd experienced in life. We attended facilitation trainings, studied Consciousness Raising groups, and developed methods to create safe spaces to self-examine, and come to revelations about our own biases. Professor Judith Kay was instrumental in directing us to resources for mindful group dialogue mediation.

During that period, I also started a Women's Group, where we used the same methods for self-reflection and growth around the realities and inequities of gender socialization.

Later that school year, I began attending SDS (Students for a Democratic Society) meetings. During the spring of 2007, Tacoma SDS joined other SDS chapters and activist organizations in protesting the militarization of the Port of Tacoma. Our efforts were supported by several staff and faculty members including Nancy Bristow and Kate Cohn. Stuart Smithers was also an ally for student activists, inviting us to speak to our fellow students in his courses.

During my second academic year, Kate Cohn nominated me fore the position of Social Justice Student Coordinator. My biggest aim in that role was to facilitate connections between--and offer support to--the many social justice-minded groups on campus.

2). What is CAIR? How did you become involved in CAIR and what was your participation in CAIR? How did CAIR challenge and critique the University of Puget Sound regarding diversity and minority students?

CAIR is the Coalition Against Injustice and Racism. I don't remember the name of the event, but one night in the student union building, Black students on campus spoke publicly about experiencing racism on campus. It was evident that, while our college marketed itself as a diverse community, people of color were largely alienated and even made to feel unsafe on campus.

That night a group of us (including Sara Jackson, Jenny Wrobel, Yusuf Word, and more), led largely by student Nicky Wright, drafted a list of demands. Some of our demands included that the University must: revise its diversity mission, commit to enrolling students from diverse backgrounds and from every high school in Tacoma, and require students to take academic courses whose curriculum confronts and engages with issues of identity and inequity.

As a member of CAIR, I was involved in drafting and articulating our demands, and I participated in student-faculty sub-groups.

3). Where there any clubs on campus that were involved or allied with CAIR?

Race Readers and BSU were involved with CAIR, and I believe other social justice groups were allies as well.

4). Why do you think the majority of current students are unaware of CAIR? (In this past year I recently learned about CAIR through the AFAM department. If I had not taken an AFAM class I would have never known about CAIR)

Because the turnover is so high on a college campus, I think it is difficult to institutionalize activist groups. If a leader/organizer graduates, the next class of freshman basically starts over, unless someone else steps into a leadership/organizing position, or the group is carried over in some other way.

The initiative to document campus activism is critical, as is the effort to institutionalize efforts (whether by creating a physical space on campus, a regular meeting that continues on no matter what, etc.). It is also important to empower people from different classes and backgrounds to organize/facilitate/lead so that when a student graduates, the impetus doesn't disappear.

5). How can current and future students concerned about social justice issues learn from the past experiences of alumni involved in CAIR?

I think we succeeded in making changes while we were on campus, but failed in that we didn't rally involvement from younger classes.

6). Why do you think it is important for current and future students to reach out to alumni?

The fellow UPS alumni I keep in touch with are so busy paying bills and student debt that it seems laughable to have anything left over to donate. Furthermore, the news we get from campus is glossy and whitewashed. But it is a good feeling to know the work we did on campus is valued, and continues to affect change today. I think this is a powerful motivator to draw support from someone like me.

UPS spends a lot of money and humanpower communicating with alumni because we are a major source of funding for the school. As such, I think alumni voices can greatly impact the direction of the school's policies and development. I would be more interested in donating to alumni fundraising events if I knew that my donations were, for example, directly going subsidize a black student's education.

What is your experience at the University of Puget Sound that drew you to become involved in social justice?

Is there someone significant to you that inspired you to become involved in social justice? (Can be anyone: family, professor, friends etc.)

What started the formation of CAIR?

How did you become involved in CAIR and what was your participation in CAIR?

Were there any clubs or departments on campus that were involved or allied with CAIR?

How did CAIR challenge and critique the University of Puget Sound regarding diversity and minoritized students?

Why do you think the majority of current students are unaware of CAIR?

How can current and future students concerned about social justice issues learn from the experiences of alumni involved in CAIR?

What advice do you have for current and future students involved in social justice?