Fair use permits the use of copyrighted materials without permission from the copyright holder under certain circumstances. Section 107 of the Copyright Act allows reproduction and other uses of copyrighted works for purposes such as criticism, comment, news reporting, teaching, scholarship and research. There are four factors to consider in determining whether a use is fair:

Although the law identifies these four factors for consideration, they are not required to have equal weight. They can be balanced in many ways and are subject to interpretation.

Use the Fair Use Evaluator Tool to help you determine whether a particular use is fair. This tool also provides a time-stamped PDF document for your records.

Remember: There is no specific number of words, lines, or notes that may safely be taken without permission. Acknowledging the source of the copyrighted material does not substitute for obtaining permission.

Fair Use Evaluator Tool will help you determine whether a particular use is fair. This tool also provides a time-stamped PDF document for your records 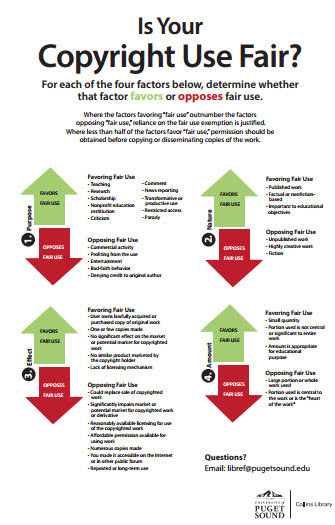 This information is excerpted from the Center for Social Media's website.

MYTH: FAIR USE IS TOO UNCLEAR AND COMPLICATED FOR ME; IT’S BETTER LEFT TO LAWYERS AND ADMINISTRATORS.

TRUTH: The fair use provision of the Copyright Act is written broadly—not narrowly—because it is designed to apply to a wide range of creative works and the people who use them. Fair use is a part of the law that belongs to everyone—especially to working educators. Educators know best what they need to use of existing copyrighted culture to construct their own lessons and materials. Only members of the actual community can decide what’s really needed. Once they know, they can tell their lawyers and administrators.

MYTH: EDUCATORS CAN RELY ON "RULES OF THUMB" FOR FAIR USE GUIDANCE.

TRUTH: Despite longstanding myths, there are no cut-and-dried rules (such as 10 percent of the work being quoted, or 400 words of text, or two bars of music, or 10 seconds of video). Fair use is situational, and context is critical. Because it is a tool to balance the rights of users with the rights of owners, educators need to apply reason to reach a decision. The principles and limitations above are designed to guide your reasoning and to help you guide the reasoning of others.

MYTH: SCHOOL SYSTEM RULES ARE THE LAST WORD OF FAIR USE BY EDUCATORS.

TRUTH: If your school system’s rules let you do everything you need to do, you certainly don’t need this code. But if you need to exercise your fair use rights to get your work done well, in ways that your system’s rules don’t foresee, that’s a different story. In that case, the code may help you to change the rules! Many school policies are based on so-called negotiated fair use guidelines, as discussed above. In their implementation of those guidelines, systems tend to confuse a limited "safe harbor" zone of absolute security with the entire range of possibility that fair use makes available.

MYTH: FAIR USE IS JUST FOR CRITIQUES, COMMENTARIES, OR PARODIES.

TRUTH: Transformativeness, a key value in fair use law, can involve modifying material or putting material in a new context, or both. Fair use applies to a wide variety of purposes, not just critical ones. Using an appropriate excerpt from copyrighted material to illustrate a key idea in the course of teaching is likely to be a fair use, for example. Indeed, the Copyright Act itself makes it clear that educational uses will often be considered fair because they add important pedagogical value to referenced media objects.

TRUTH: "Noncommercial use" can be a plus in fair use analysis, but its scope is hard to define. If educators or learners want to share their work only with a class (or another defined, closed group) they are in a favorable position. However, some more public uses may be unfair even if no money is exchanged. So if work is going to be shared widely, it is good to be able to rely on transformativeness. As the cases show, a transformative new work can be highly commercial in intent and effect and qualify under the fair use doctrine.

MYTH: FAIR USE IS ONLY A DEFENSE, NOT A RIGHT.

TRUTH: In court, doctrines like self-defense or freedom of speech or fair use aren’t considered until after the plaintiff has proved that there may have been assault or defamation or copyright infringement. Procedurally, that makes these doctrines "affirmative defenses." But in the real world, people are entitled to protect themselves from harm and to speak their minds; likewise, we acknowledge the right of fair use, which is specifically provided by law to people who make reasonable but unauthorized use of copyrighted works.

MYTH: EMPLOYING FAIR USE IS TOO MUCH TROUBLE; I DON’T WANT TO FILL OUT ANY FORMS.

TRUTH: Users who claim fair use simply use copyrighted works after making an assessment of the particular situation—there’s nothing formal or official to "do" to claim fair use. You do not have to ask permission or alert the copyright holder when considering a use of materials that is protected by fair use. But, if you choose, you may inquire about permissions and still claim fair use if your request is refused or ignored. In some cases, courts have found that asking permission and then being rejected has actually enhanced fair use claims.

MYTH: FAIR USE COULD GET ME SUED.

TRUTH: That’s very, very unlikely. We don’t know of any lawsuit actually brought by an American media company against an educator over the use of media in the educational process. Before even considering a lawsuit, a copyright owner typically will take the cheap and easy step of sending a "cease and desist" letter, sometimes leading the recipient to think that she is being sued rather than just threatened. An aggressive tone does not necessarily mean that the claims are legitimate or that a lawsuit will be filed.

This code of best practices in fair use in teaching for film/media educators was designed by The Society for Cinema and Media Studies. It deals with classroom screenings, broadcasts, and derivative works.

This issue brief from the Library Copyright Alliance examines the permissibility of the streaming of entire films to a remote, non-classroom location. The brief states: