Welcome to the Campus History Tour

Welcome to the University of Puget Sound's campus historical tour! On this site, you can find historical information about the buildings and important monuments located on the university campus at 1500 North Warner Street in Tacoma, Washington. The university has existed in some form since 1888 – the date found on our iconic seal, as can be seen in the tour stop "Benefactor Plaza" – but before the 1920s, the then-College of Puget Sound occupied several small buildings, about a mile away from the current campus, at the corner of Sprague and Sixth Avenue.

The Sixth and Sprague Campus in 1904 (Image source: A Sound Past). Nowadays, the campus occupies a plot of land – approximately ten blocks by twenty blocks – in Tacoma's North End neighborhood. This land was once primarily a berry farm, and in was incorporated into the city of Tacoma as part of the "College Addition" in 1923 (College Park History District Registration Form, Register of Historic Places, 7). Just after the formal addition of the college land to the city, Puget Sound moved to its new home at the current campus, taking its symbolic heart, the color post, with it, in 1924. (For the full story, see the 'Color Post' tour stop.)

Introduction to the Tour Format

This tour highlights specific places on the University of Puget Sound campus. For the full effect, walking to each site will give you the best spatial context for the historical narratives and images, but the tour can also be explored entirely from your device. Click on the tabs above to visit each tour stop. 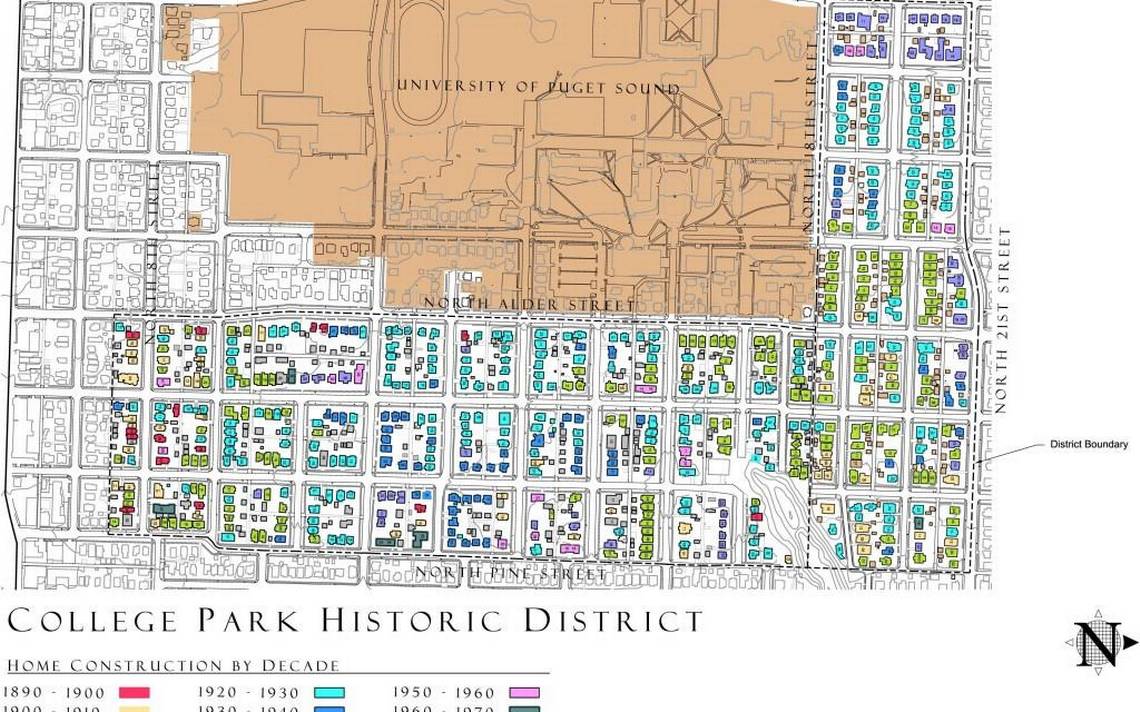 A map of the College Park Historical District, as defined by the historical boundaries of the College Addition, whose incorporation into the city of Tacoma paralleled Puget Sound's construction of the present day campus (Image course: Tacoma News Tribune).

Map of the University of Puget Sound

This map shows the location of the tour stops on the campus. Click on the colored markers to show which building or monument is located in which place!